An Internet of Value - Blockchain, beyond the hype and why CxO's must take note

A Blockchain, in its simplest form, is a distributed database system where there is no one master (primary) database, but many databases that are all considered primary. All parties participate in populating entries into the respective databases and receive the entries of the other participants.

But how does this apply to your business, and is this profoundly going to change how the world works? Let’s look at an analogy: Imagine I create a song and generate a file of my recording in mp3 format on a USB stick. I can give two of my friends a copy of this; they can do the same, and so on. With thousands of eventual copies going around, it will be impossible to establish which was the real version I own and which I ideally wanted to use in exchange for royalties. By the way, if I ever had to create a song and recorded it, I doubt very much that I would garner thousands of fans. I am just not David Grohl 😊

This is where Blockchain comes in. It is a shared ledger that is used to record any transaction and track the movement of any asset whether tangible, intangible or digital (such as my mp3). It is immutable, so participants cannot tamper with entries, and it is distributed, so all participants share and validate all the entries.

Blockchain will allow “my fans” 😊 to enter into a contract with me directly. As they stream the song, payment goes directly from their wallet into mine. The information about what was listened to and what I was paid, is verified by all the databases in the network and cannot be changed. There are no middlemen (like a central streaming service, or a record label), so the contract (a digital smart contract) is between those that listen to my song and me directly.

It is at this point important to mention that Blockchain is not Bitcoin, or any other cryptocurrency, although it did start life as the technology that underpins cryptocurrencies. This article, the first in a series of three articles, looks beyond its use in cryptocurrencies, and rather highlights use cases to show CxO’s why it is so important to take note of Blockchain and to start controlled proof of concepts (POC’s) and research and development (R&D) in this technology now. We look at some examples across a wide range of industries and use a Courier based use case to delve deeper into what Blockchain could mean for organisations using the Internet of Things (IoT).

Dope testing and cheating have been quite topical lately with large portions of the Russian contingent banned from the Rio Olympics in 2016, and again from the Winter Games in South Korea in 2018 for systemic manipulation of tests. Blockchain will make the test results immutable and open the results up to all that participate in the data cycle. Even if the athlete changes sports, that data will be available to participating sporting organisation. http://www.vocaleurope.eu/how-technology-can-transform-the-sports-domain-blockchain-2-0-will-boost-anti-doping-fight-sports-investments-and-e-sports/

Some countries are planning health data exchanges with the aim of addressing a lack of transparency and improving trust in patient privacy as well as fostering better collaboration. Blockchain will provide practitioners and providers with better access to health, patient and research information. Adoption of Blockchain will lead to closer collaboration and better treatment and therapies, sooner.

Blockchain in healthcare is real and imminent. This study from IBM shows how pervasive Blockchain is expected to become with 16% of 200 responding health executives aiming to implement a Blockchain solution shortly. https://www.ibm.com/blogs/think/2017/02/Blockchain-healthcare/

Australia’s Commonwealth Bank collaborated with Brighann Cotton and Wells Fargo to undertake the world’s first global trade transaction on Blockchain between independent banks – an unbroken digital thread that ran between a product origin and its final destination, capturing efficiencies by digitising the process and automating actions based on data. https://www.commbank.com.au/guidance/business/why-blockchain-could-revolutionise-the-shipping-industry-201708.html

CommBank is taking this a few steps further with an appointed head of Blockchain and a whopping 25 proof of concepts over the past five years, including the ability to peer-to-peer transfer of funds offshore within minutes rather than days, and the issuing of smart contracts. http://www.innovationaus.com/2017/12/CBA-outlines-a-blockchain-future

Customers and insurers will be able to manage claims better, transparently and securely. Claim records, which are tamper proof once written to the chain, will streamline the claim process and minimise claimant fraud such as multiple claims for the same incident.

With Smart Contracts, payments can be triggered as soon as certain minimum conditions are met. There are also many smart contract rules that could ascertain when a claim is also fraudulent automatically denying the claim. https://www2.deloitte.com/content/dam/Deloitte/ch/Documents/innovation/ch-en-innovation-deloitte-Blockchain-app-in-insurance.pdf

These businesses, who often make heavy use of IoT devices, will benefit hugely from Blockchain to improve the ability to track every aspect of a package delivery cycle and minimise fraud.

There were 20 billion connected IoT devices in 2017 and projected to grow to 75 billion by 2025. https://www.statista.com/statistics/471264/iot-number-of-connected-devices-worldwide/

The current centralised approach for insertion and storage of IoT data (see the image below) simply won’t be able to cope with volume demands and transactional contracts will have to rely on multiple 3rd parties. Also Managing data security can be very complex because data will flow across many administrative boundaries with different policies and intents. 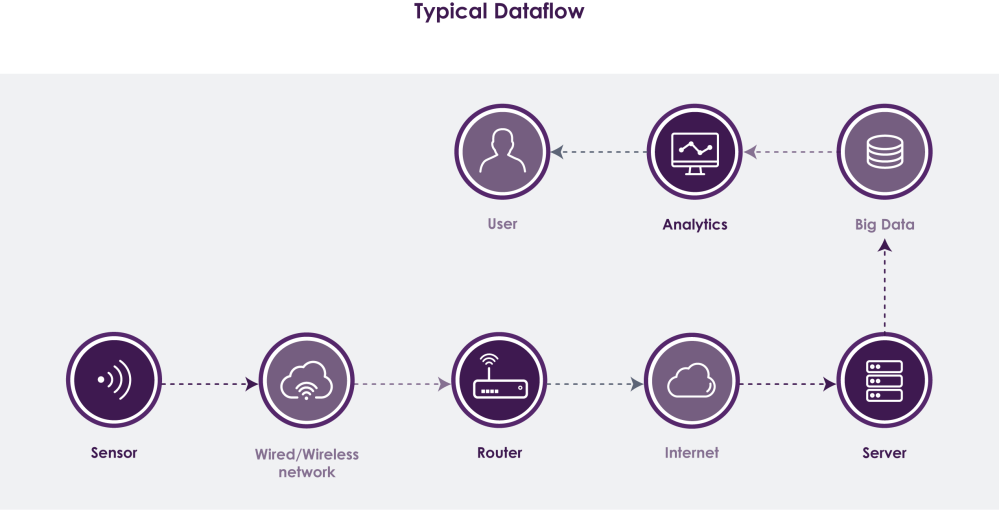 In contrast, the Blockchain decentralised peer-to-peer approach for insertion and storage of IoT data eliminates issues with volume demand, (the data is stored across a potentially unlimited number of databases). There is no single point of failure that can bring the whole IoT network to a halt (computation and storage is shared and there is no one primary). It supports tamper-proofing (all participating databases validate a transaction, which is then shared and becomes immutable), which means increased security from rogue participants such as IoT device spoofers and impersonators (Spoofing can occur when security is breached through a lowly secured device on a shared IoT network. If the lowly/ unsecured device is hackable, then the whole network is compromised as it will believe that the hacker is encrypted as the intruder is on it through the easily hacked device). 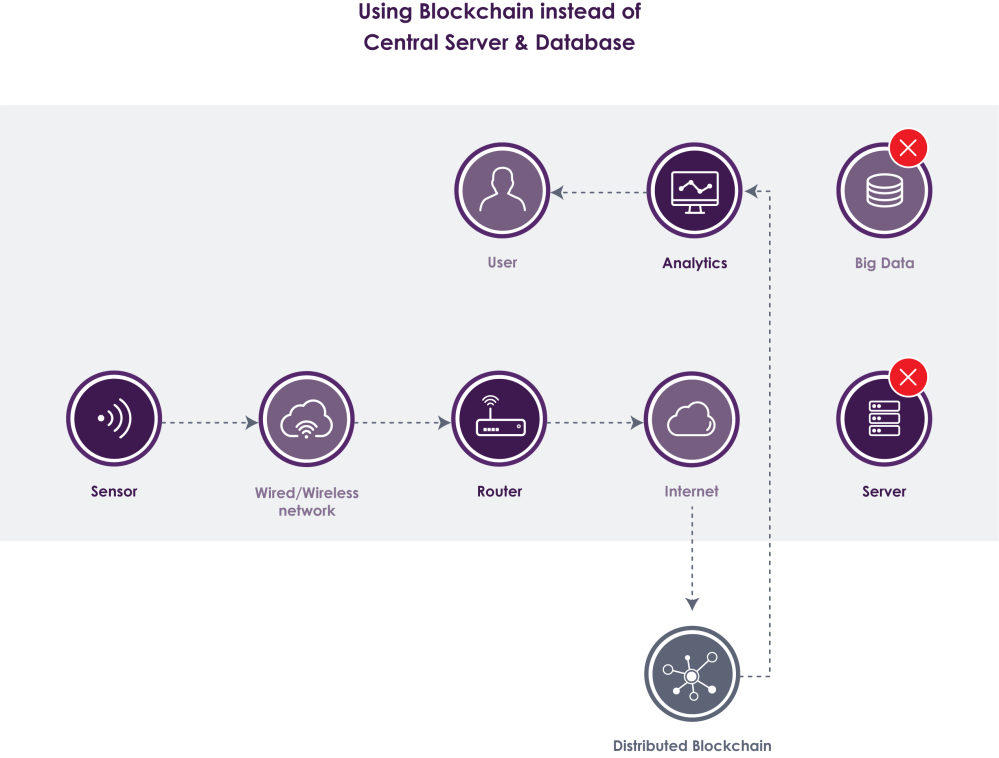 Delving deeper into our Courier Delivery use case - Blockchain and IoT, creating an Internet of Value

In a courier parcel delivery ecosystems, the movement of parcels is tracked every step of the delivery process via IoT devices that reads a barcode, or another form of identification that can be picked up by the sensor. From the original warehouse to a vehicle, a plane, another warehouse, and finally your home.

By using Blockchain, each sensor participates in the chain and records “possession” of the delivery item (and so also the location). Each time it is read by a new sensor, the new location is broadcast to, inserted, then shared and agreed on by the remaining participants on the Blockchain. Every block is subsequently a transaction that is unchangeable once inserted into the blockchain.

Each Blockchain entry (i.e. the barcode, the location of the package and a date-time stamp) is encrypted into the Blockchain. The “possession” steps are tracked no matter who is involved in the package delivery process (from the origin which could be the delivery at an Aus Post outlet, to an Aus Post vehicle to the airport, to QANTAS en route to the US, to a DHL distribution centre in a US airport, and finally to a DHL delivery vehicle en route the destination address). This enhances trust in the system as there is no need to adhere and interface with a single primary system, and package tracking is put on steroids. If you have ever sent anything abroad, you would know that granular tracking effectively ends at the border. This won’t be the case with Blockchain. https://www.draglet.com/Blockchain-applications/smart-contracts/use-cases

It must be noted that Blockchain technology has not been around for very long and is rapidly evolving. Widespread commercialisation beyond cryptocurrencies is still in its infancy. But all indications are that it will be a hugely disruptive technology.

The many examples of important players taking this technology seriously move Blockchain beyond hype:

CxO's may ask, why to invest in something they cannot yet fully understand, but this was probably a very similar question asked in the 90’s about the internet. The learning curve will no doubt be steep, but that makes investing in targeted R&D and POC’s early all the more important so that they do not get caught off guard once commercialisation starts increasing.

In the next article, Blockchain, lifting the lid on confusing concepts, we will delve a little bit deeper and describe the concepts in more depth.